Check out the slideshow below, featuring Dr. Alessio Fasano, about celiac disease’s millennia-long rise to prominence.

Alessio Fasano, MD, Chief of Pediatric Gastroenterology and Nutrition and Director of the Center for Celiac Research at Mass General Hospital for Children, and Celiac Disease Foundation Medical Advisory Board member, pioneered celiac disease research in the United States, bringing to light its alarming prevalence and proclaiming celiac disease as a common autoimmune disease. Thanks to the tremendous efforts of Dr. Fasano and his colleagues, celiac disease is now known to have a global footprint.

Check out the slideshow below, featuring Dr. Alessio Fasano, about celiac disease’s millennia-long rise to prominence. 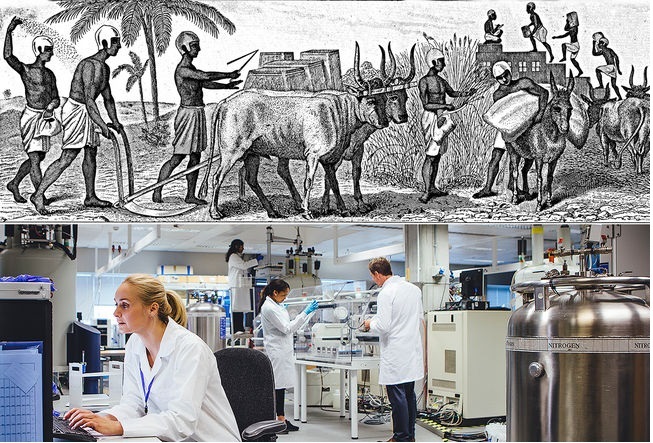 Clinically speaking, celiac disease (CD) is a chronic gluten-sensitive immune-mediated disorder that primarily affects the small intestinal mucosa. CD arises in individuals with the human leukocyte antigen (HLA) DQ2 and/or DQ8 alleles; after they consume gluten, such persons can experience a host of deleterious clinical symptoms, from the gastrointestinal to the neurologic.

Despite having been first identified in ancient Greece, much of what we know about CD comes from the past few decades, when a dogged group of epidemiologists and researchers began tracing its millennia-old path around the globe. This presentation charts their hard work and how a once obscure but increasingly prevalent disease improbably birthed the biggest diet trend going. 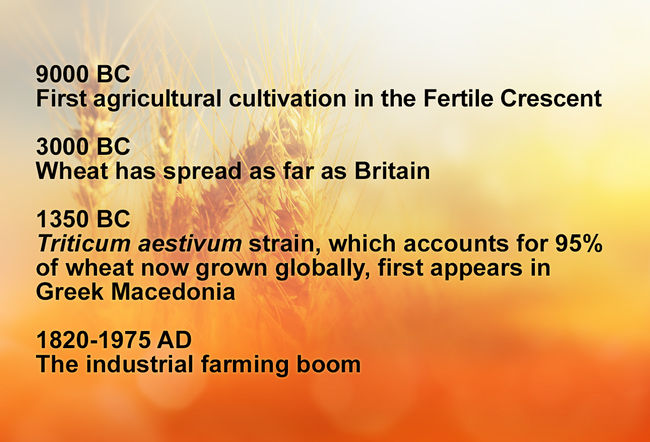 The Seeds of an Emerging Illness

Mankind’s turn toward agriculture practices around 10,000 years ago provided the conditions upon which human civilization was built; it also represented a radical schism in terms of what we put in our bodies. From a hunter/gatherer diet of meat and foraged fruits and vegetables, our digestive systems suddenly had to contend with a new item on the menu: gluten. A storage protein that allows certain flowering plants to nourish their seeds, gluten is found in such grains as wheat, barley, and rye.

Although gluten-containing plants took several thousands of years to spread across the globe, from an evolutionary point of view, it occurred in the blind of an eye. This effect was compounded by the fact that the gluten content of available grain varieties has notably increased within the past 500 years, leading to theories that our immune systems were not given sufficient time to develop adaptive mechanisms to process the “new” substance. 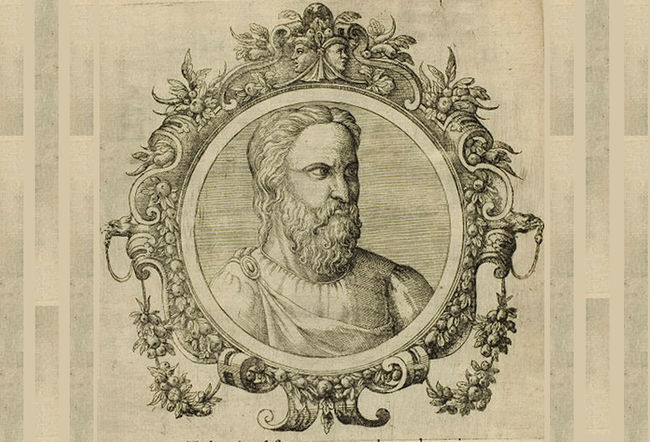 A Disease Gets Its Name, and a Disease Reveals Its Source

The first-known description of CD comes from nearly 2000 years ago, via the Greek physician Aretaeus of Cappadocia. In discussing a patient with symptoms that included diarrhea and malabsorption, Aretaeus used the term “coeliac,” from the Greek “Koiliakos” or “abdominal.” A full description of CD would not appear in the literature until the late 19th century, when the London-based physician Samuel Gee reported its appearance, primarily in young children aged 1-5 years who presented with chronic indigestion. Gee correctly understood CD to be caused by food-related malabsorption, and recommended dietary intervention consisting of – unfortunately – toast.

The next major breakthrough would occur through a combination of serendipity and disaster. As World War II raged on, disruptions of the food supply ravaged the Netherlands, making wheat a rare commodity. The Dutch pediatrician Willem Karel Dicke observed a corresponding drop in mortality among children with CD, thereby making the causative link that would jumpstart the gluten-free diet, the main therapeutic intervention to this day. 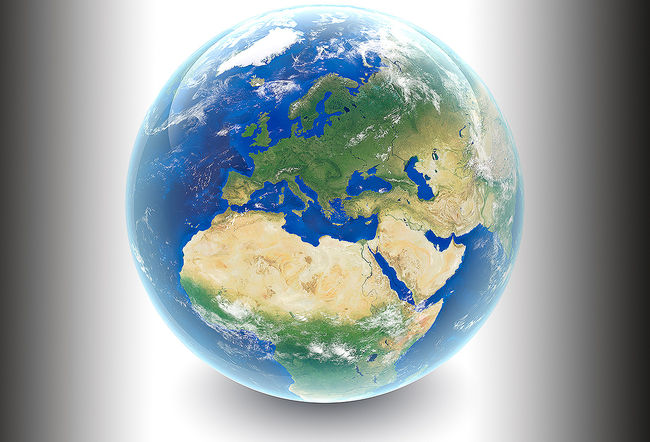 As detailed in the book Gluten Freedom, by Alessio Fasano, MD, the global search for CD that followed Dicke’s observation was launched from an erroneous assumption that this condition primarily affected children from Northern Europe. The underlying theory was that natural selection had eliminated the disease from regions where agriculture first appeared. Beginning in the 1900s, pioneering epidemiologic work upended notions that CD was not a global disease. By the end of the decade, CD had been identified in countries extending from Italy to India, and has now been observed in nearly every corner of the world where gluten is consumed.

Yet even in the current day, the role that geographic region plays in CD remains debated. A recent study even found the prevalence to be higher among those in northern latitudes of the United States than in their counterparts to the south. “It is possible that geographic and environmental differences, particularly feeding habits, may dictate the final onset and clinical presentation of celiac disease that may account for this apparent difference as reported by this study,” said Dr. Fasano, the W. Allan Walker Chair of Pediatric Gastroenterology and Nutrition Professor of Pediatrics at Harvard Medical School. 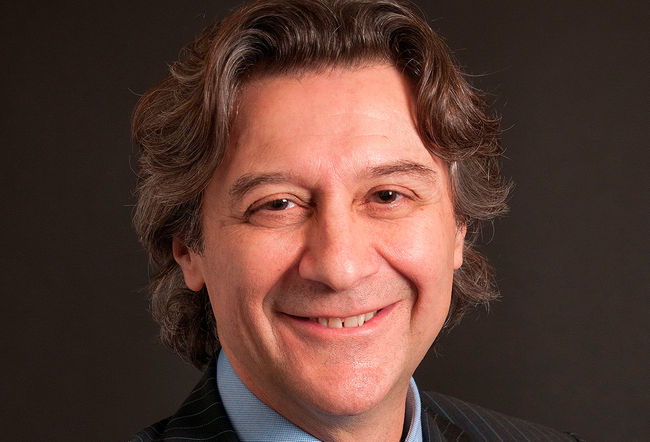 As epidemiologic researchers planted the flag of CD across the globe, one region proved surprisingly impervious to their efforts. Despite having all the conditions necessary for it to occur, including an abundance of gluten-based products, CD was considered exceptionally rare in North America in the early 1900s. Dr. Fasano and his colleagues set out to solve the riddle of just why this was. At the risk of what Dr Fasano describes in his book as “professional suicide,” they procured 2000 blood samples from the American Red Cross and tested them for autoantibodies to CD.

The investment paid off, with their findings moving the disease from the status of “rare” to one with a prevalence then believed to be close to 1 in 250. Several years later, a greatly expanded epidemiologic study from this team indicated that the prevalence of CD was as high as 1 in 133, in line with figures from Europe at that time. With their efforts, a missing piece of the map fell into place, and CD’s status as a global disease was secured. 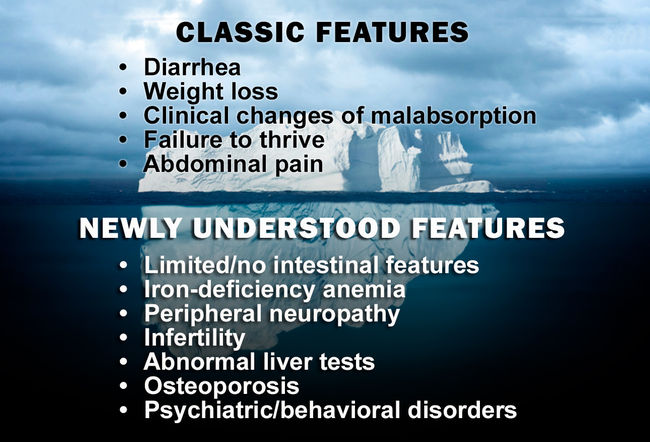 Part of the challenge in identifying CD is its emerging status as a so-called “iceberg disease,” which can present subclinically with limited or even no intestinal symptoms. Confounding earlier notions of the disease, CD now presents more often without malabsorptive symptoms or malnutrition, and affects both underweight patients and overweight patients at approximately the same rate. What was also once thought to be a condition diagnosed primarily among pediatric patient is now seen at a much higher rate (9 to 1) in adults between the fourth and sixth decades of life. Yet young patients with CD still present specific concerns, with evidence suggesting that they experience psychiatric conditions at approximately 1.5 times the rate of the general population.

“This probably represents a paradigm of the gut/brain axis, with two-way crosstalk between these two organs,” said Dr Fasano. “Pediatric patients who present with symptoms that include anxiety, depression, attention-deficit/hyperactivity disorder, or even autism deserve special attention, particularly in monitoring these symptoms after implementation of a gluten free diet.”

The conditions required for CD to manifest itself are ever-thriving, supported by an increasing dietary reliance on gluten-based foods. Furthermore, the transition from hunter/gatherer society to mass-produced agriculture is not solely a vestige of history, but continues to this day among indigenous tribes, such as those of the Coast Salish First Nations populations of western Canada. Further exposure to gluten is expected in fast-growing economies such as China, where the western diets that are currently in vogue are expected to lead to an uptick in CD. 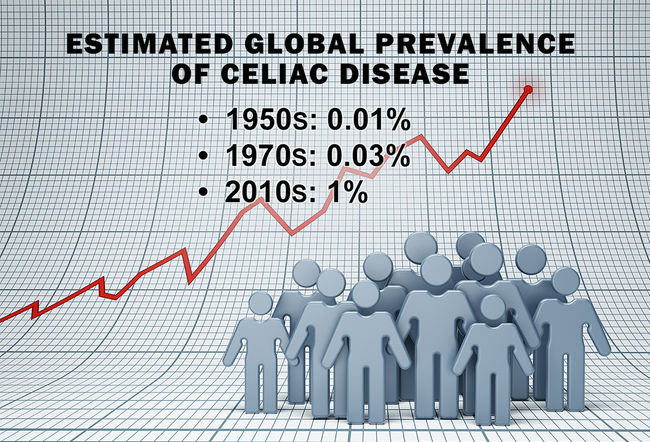 How High Can it Go?

If the CD research community’s past half-century was primarily spent getting their colleagues to accept that this was a disease with a global footprint, the coming years will probably be spent determining its full impact. It is estimated that as many as 7 out of 8 people with CD have not been diagnosed. If true, this would represent a notable unrepresented cohort for a disease that has already seen its prevalence rate surge since the 1950s. 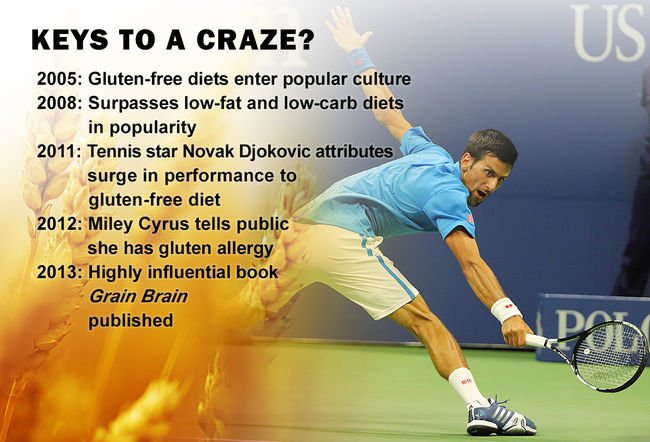 As the prevalence rates and profile of CD within the medical community began to rise, so too did a strange, and probably related, phenomenon: the popularity of the gluten-free diet among the general public. Like all dietary trends before it, the origins are hard to source, although the factor that accelerated it is certainly not. “The gluten-free diet has been indisputably fueled by its adoption by high-profile people, particularly actresses, actors, and sports champions,” said Dr Fasano.

The 2015 book The Gluten Lie noted that this is not the first time that CD may have birthed a dietary craze. In the 1920s, doctors in the United States recommended that their patients with CD subsist on bananas and milk, thinking that special enzymes were responsible for their marked improvement. A decade later, this diet had skipped out of the clinic and into the mainstream as a fashionable means for taking off the pounds. 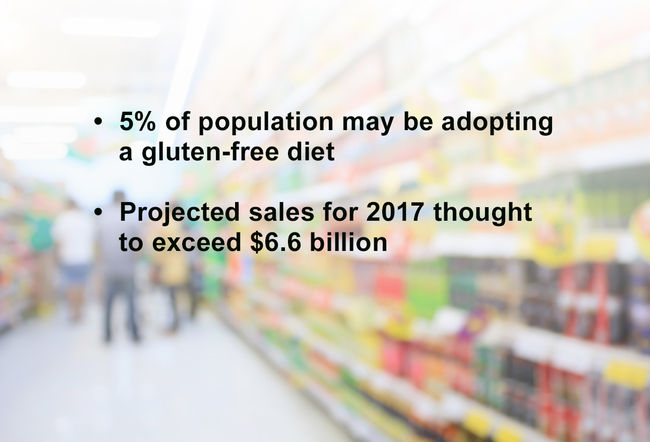 A Burden Shrinks as Options Expand

A study published in 2005 that was based on interviews with patients with CD reposted that their lives were substantially influenced by feelings of shame, isolation, and fear, given their limited ability to find foods that they could safely consume.

In the intervening years, the improbable rise of gluten-free diets has rendered this study a relic of the past. With upward of 5% of the population thought to now be following gluten-free diets, supermarkets and restaurants are suddenly awash in offerings for those with CD, wheat allergies, or nonceliac gluten sensitivity. However, the majority of people driving this trend have no medical necessity for adopting this diet, a fact that carries its own health risks. 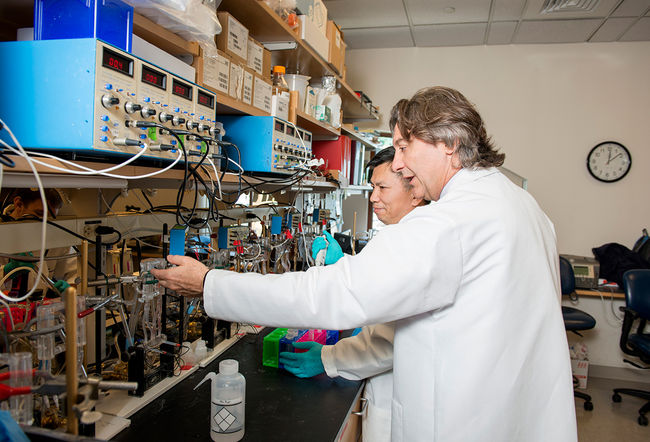 We may be in the grip of a gluten-free diet boom, but according to Dr Fasano, there has not been a trickle-down effect when it comes to funding for celiac research. “Funding was almost non-existent 15 years ago, and it remains extremely low to date,” he said. “Nevertheless, the interest of the research community into celiac disease as a model of autoimmunity has indisputably increased.”

He added that researchers are now looking at CD, and in particular its key genetic component (HLA DQ2/DQ8) and environmental trigger (gluten), as a means for understanding other chronic inflammatory diseases. Dr Fasano and Colleagues are currently conducting the prospective Celiac Disease Genomic Environmental Microbiome and Metabolomic study. Time will tell what its findings add to our understanding of this ever-evolving disease that’s been 10,000 years in the making.