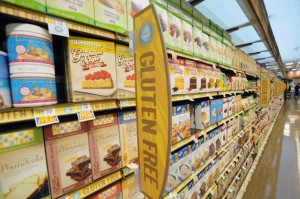 On August 5th, 2013, the FDA issued its final ruling on the label “gluten-free” and when it could be applied to packaged foods under the FDA’s purview. The compliance date for this ruling, August 5th, 2014, has come and gone, and two studies have been published that investigated the level of gluten in foods labeled “gluten-free” before the FDA’s final ruling came into effect. The two studies are, “Gluten detection in foods available in the United States – A market survey,” first available online in Food Chemistry on August 5th, 2014, and “A comparison of gluten levels in labeled gluten-free and certified gluten-free foods sold in the United States,” published in the European Journal of Clinical Nutrition advanced online edition on October 1st, 2014.

The first article, written by Dr. Sharma, Dr. Pereira, and Kristina Williams, looked at 275 gluten-free labeled products and 186 non-gluten-free labeled foods (with no wheat/rye/barley in the ingredients). Using multiple ELISAs (enzyme-linked immunosorbent assays), the group determined gluten levels in each food product. The results of the experiment were 3.6% of gluten-free labeled foods had a level of gluten higher than 5ppm (parts per million), and 1.1% of the products were above the FDA’s regulatory level of 20 ppm with a maximum at 554 ppm. For the non-labeled foods, 19.4% had a gluten content higher than 20 ppm. Overall, there was a high level of compliance with the FDA’s new ruling, with 98.9% of products falling below the regulatory mandate. Interestingly, in the non-labeled foods, the group found that many of the foods that contained higher gluten levels also contained oats.

Oats have long been controversial in the gluten-free diet. It is suspected that although oats contain no gluten, they may cause a reaction to certain subsets of celiac patients. In this experiment, there was gluten found in the products, so it may be a case of cross-contamination with oats somewhere along the packaging and distribution system, or it may have just been coincidental.

Overall, only eight products (5.1%) had more than 20 ppm of gluten. Of those, six (5.4%) were in the first group of gluten-free labeled items, and two (4.3%) were in the second group of products certified gluten-free. The authors concluded that there was a high level of compliance with the FDA’s standard of less than 20 ppm of gluten even before the deadline of August 5th, 2014. Since that date, the compliance rate may have risen even more, so consumers should feel relatively confident in the gluten-free label. However, if symptoms do persist in a celiac patient, accidental gluten exposure in the diet is most likely the cause and the possibility should be examined by his or her doctor.

The papers discussed in this article can be found here and here.