Alternatives to gluten are absolutely vital to those diagnosed with celiac disease as the only treatment available currently is a life-long, strict gluten-free diet. Many doctors and nutritionists recommend foods like amaranth, millet, buckwheat, and quinoa as substitutes for wheat and other grains toxic for celiac patients; however, there have been recent laboratory tests that suggest quinoa contains proteins similar enough to gluten to activate the immune system of those patients with celiac disease. Research on the in vivo effects of quinoa is crucial to truly determine if quinoa can be tolerated by those afflicted with this disease.

A new study, published by The American Journal of Gastroenterology, looked at the in vivo effects of quinoa and has found that celiac patients can not only tolerate but improve on a diet including quinoa. The study, titled “Gastrointestinal Effects of Eating Quinoa (Chenopodium quinoa Willd.) in Celiac Patients” examined 19 subjects, each diagnosed with celiac disease, for six weeks on their gluten-free diet. Led by first author Dr. Victor F. Zevallos, the authors kept track of the subjects’ blood work and gastrointestinal parameters as each patient ingested 50 grams of quinoa every day. 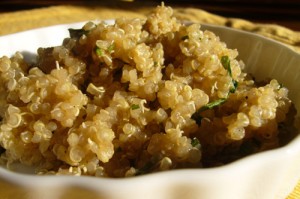 Quinoa is a pseudocereal originating from the Andean region in South America that does not contain gluten. It is sometimes referred to as a “superfood” as it contains a high percentage of protein compared to other cereals and pseudocereals, it’s a complete source of all the amino acids humans need to ingest, and it’s a good source of dietary fiber, calcium, and iron. Celiac patients often have an iron deficiency when on a gluten-free diet which makes quinoa a very promising alternative to wheat.

However, a previous study done by Zevallos and his colleagues found that quinoa does contain prolamins that were, in some strains, able to stimulate the immune system in biopsied tissue from celiac patients. Prolamins are plant proteins that have a high proline content which makes them difficult to fully digest. Gliadin, a component of gluten, is a prolamin found in wheat and can induce celiac disease.

That previous study, titled “Variable activation of immune response by quinoa (Chenopodium quinoa Willd.) prolamins in celiac disease”, tested 15 quinoa cultivars on if they could activate the immune system of cultured duodenal biopsy samples. The authors found that two of the cultivars did stimulate the innate and adaptive immune responses of the tissue and caused the release of cytokines at comparable levels to gliadin.

This new study, published in advance online on January 21st of this year, looked at how celiac patients reacted to ingesting quinoa. The results should bring a sigh of relief to those patients with celiac disease who rely on quinoa in their diet. Both the results from the blood tests and the gastrointestinal parameters were normal throughout the study, and the authors also found a mild positive effect on the subjects’ cholesterol levels.

They conclude that quinoa was well tolerated by the celiac patients over the six week period. The study only involved 50 grams of quinoa per day, so an immune response similar to the immune response to gluten could be possible with significantly higher amounts of quinoa in the diet. The authors also make a note to state that “further studies are needed to determine the long-term effects of quinoa consumption.”

Quinoa is a very nutritious food and a good source of important nutrients like protein, iron, and calcium. This study helps to support many physicians’ recommendation of quinoa as an alternative to wheat for celiac patients. Hopefully this recommendation holds true as research into celiac disease and quinoa continues.

The articles discussed can be found here and here.